In 1998, after surviving a helicopter crash and going missing for two days in the middle of the Amazon forest, D., my then partner, was found. He was badly injured, but God decided to spare him, and I could only be grateful for it.

After undergoing an emergency surgery for a massive internal bleeding in a nearby hospital, D. was transferred from the city of Roraima to Rio de Janeiro in an ambulance airplane. It was a six hours flight which, for someone in a critic state, is a long shot. When the airplane arrived at the domestic airport in Rio de Janeiro my sight was fully back: I could see the dozens of reporters on the roof of the airplane hangar pointing their big lenses at the landing strip to get the best shot. I had no idea if D. would make it through the night but I knew, for a fact, that our faces would be stamped in every single newspaper of that big country of ours the next morning. After his rescue and love declaration, live in national television, I had become Brazil's sweetheart. We were the couple everyone was talking about and rooting for. 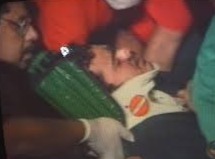 Difficult memories from D.'s rescue. It felt like all of Brazil was praying for us.

A Nation in Prayers

D. was in the ICU for a couple of days, and a whole week in the hospital, where the press literally camped outside. We were on the cover of every printed newsstand paper for a week, also on TV. The first interview was for a night show called Fantástico, they set up a studio inside the hospital so we could talk and thank people for all the support. I was getting letters, flowers, teddy bears, hugs, rosaries, bibles. It was like the whole nation got together for us, and their faith made him recover. I never felt so blessed and thankful.

Wait, so the obvious thing to do after this whole shock was to get married in front of national television? Right? Or having the ceremony and selling the wedding pictures to People magazine? It crossed my mind, but behind walls, we were facing a very serious issue that we could not share with anyone.

"We need to talk,” our amazing doctor, Ailson, said, as he closed the door. He was there to finally discharge D. from the hospital.

I sat on the corner of the bed, rubbing my hands against each other.

"There is something I need to disclose to you,” he emphasized.

"OK,” I said, feeling my back and neck nerves squeeze tight.

"You both know that D. lost a lot of blood, right? That he received transfusion. Actually, almost all of his current blood is transfused."

"Where are you going with this? Yes, we both know it….,” I complied.

"Well, the hospital you had surgery in still doesn't run HIV tests. You got blood from four different people, none tested. Since you got here, we have tested you for any possible diseases, but there is a six-month window to make sure your blood is clean from HIV, our main concern at this point,” he said with a grim, showing how sorry he felt for us. It was the late 90s and the HIV was devastating at this point. Just the thought of it let me breathless.

“For the upcoming six months, you cannot have unprotected sex or conceive, OK? I am sure you'll be fine since the population in that area is mostly of native indigenous with very strong and healthy bodies."

What was really going on in my mind was: Now this? We would not be able to have kids? He may have a terminal disease?

It was like my heart stopped right there, and my emotional state for the next months also deteriorated. I stopped getting my periods for the full length of the immunological window – six months. I guess it was my body's way of showing some solidarity to my partner’s body.

As life tried to go back to normal – D. resumed shooting the primetime soap opera that the accident had interrupted, his character conveniently suffered a car accident and he came back in a wheelchair – we found out that we could not be anonymous anymore. We had gotten elevated, during those five minutes of fame, to being the couple of the moment. Invitations were hovering our heads: free wardrobe, free vacations, free meals. Denying it was like trying to hide from a hurricane behind screen door.

My life went upside down. I never felt such emotional pain as during this tragic episode.

The spotlight was bothering me. I felt my own skepticism overshadowed by an empty celebrity lifestyle. The combination of both made me extremely uncomfortable. And because I found myself very confused about my own identity, I had a full make-over and cut my almost 30-inches curly blond hair into 3-inches platinum pixies. I had to reinvent myself.

Instead of getting the big wedding, we decided to buy a house. A beautiful one that we started revamping, all the three floors and the yard. A fabulous walk-in closet, just big enough to host all my new free clothes. A beautiful bathtub with Spanish tiles. A guest room that pretty soon would be transformed into a nursery – it was just a matter of time. An office overlooking the tropical forest trees. A huge library on the first floor. And two on-suites for a nannie and a cook attached to the house, so we could have people taking care of us 24/7, like spoiled celebrities, if we wanted to. Yeah, we were becoming finicky people. And although it didn’t feel right to me, I could not stop myself from getting it.

Even after we split up, we were still a celebrity couple, and D. went to all my book launchings.

We kept our image on the media, magazine covers, TV shows. Many invitations to travel, fancy hotels and private islands. Things were also in motion professionally: I got invitations to write movies, books, TV shows. Our names were a brand, but fame and money wasn't bringing me the most important thing: happiness.

As the six months flew by, the immunological window was lifted, and we were fortunate enough that D. had not contract HIV. He was healthy, he looked more handsome and sexy than ever with his new face scars – and even the 20-inch trail across the belly. But little did we know that our internal wounds would keep bleeding at the smallest friction.

My Body, My Rules