I know we all like to say how cool our parents are – yes, there is a tacit competition in humankind to have the best folks. I really got a golden ticket, since the day I was born. I have the coolest parents I could ask for. My parents gave me love, a lot, but also the kind of guidance and friendship that allowed me to feel (and be) free while maintaining my feet on the ground.

My sweet parents when they got engaged.

They met in 1969 at a Communist Party meeting. Ana Maria, a raised catholic, and Mauro, the son of a Ukrainian Jewish immigrant, somehow feel in love. I was conceived in the Spring after they got married. He worked as a Journalist; she was a professor assistant at the Economic School of the Federal University. Brazil was under the toughest times since 1964, when a military coup-d’état suspended democracy and any individual form of freedom. They were young and idealists. So shortly after I was born, we had to flee the city, then the state, and finally the country. They were unfairly chased and blacklisted.

When we were living in France, they separated – but managed to remain friends. A team that had a very clear goal: to raise me the best they could. I was their only child, and since they never remarried, I remained without siblings. I have also always been the center of attention – something a lot of people wish they had. Nevertheless, my parents made a point to not spoil me, so I grew up much more under the socialist than the individualist precepts. Something that shaped me out to be ready for real life – understanding that I am no better than anyone, but also no less.

When I was 15 years old, I spent some time in a kibbutz, in Israel. I had lost my virginity and, according to our family pact, I needed to inform both of them of big news. It was just the way things were – and still are. So, upon my return, I had a tough mission: to rip the band-aid as fast as I could.

It was early morning when my mom picked me up at the airport. We went home, had breakfast, sat on the boxy framed couch where the sun was shining in our living room. She was massaging my feet as a distraction while she slowly started asking about Oscar, my boyfriend in the kibbutz. Before she could say anything, I just broke the news: “We had sex, by the way.”

As I shook my head negatively, mom was freaking out.

“Laura, you did not use a condom?”

“Oh my God!”, she ranted, before I could continue my sentence.

“Mom calm down. I did not wear a condom but he did. Can women really wear condoms?” I asked, curiously. At least not back in the very early 90s…

She sat back down, livid, as if the world had either stopped spinning around or was going very fast. “I can’t believe you are not a little girl anymore.”

Because my mom was always first and foremost my best friend, and she was just 39 when this conversation took place, we chatted calmly about feelings. She asked me a little bit too much about the physical aspects of having sex, and that I did not feel very inclined to share. Usually I didn’t have problems sharing stuff with her, but that time I thought I needed more privacy.

“Can we talk more later? I need to rest for a bit” I said.

“I hope you are just jet lagged and not pregnant” she replied, not really joking. 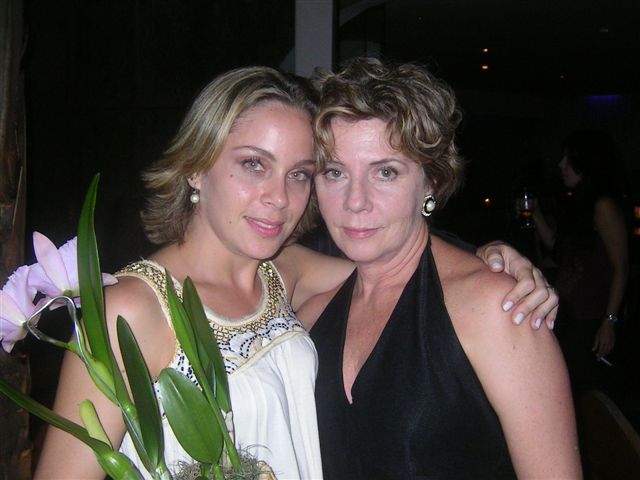 I woke up hours later with my father kissing my cheeks. He had just flown in from São Paulo, where he was currently living, to visit me. He and my mom split up when I was only four years old and we were living in Paris, but they always kept a very close relationship. They had managed to be best friends, and it was very normal for him to visit me at my mom’s.

I slowly reclined up from under my pink quilt, awakening from a deep sleep. It took me an instant to realize what he was talking about. Then it kicked in.

“It was fantastic dad. I love Israel!”

I hugged him, feeling happy. My father has always been my best friend.

My mom stuck her head in the room, “Lunch is served, darling. Come?” and then as she left, we could overhear what she told our cook, “Oh my, it’s so good to have Laura back.”

Over lunch, I shared as much as I could with them. The kibbutz work shifts – which included avocado and orange harvesting, packaging apples for export, cooking for the whole kibbutz (peeling potatoes, chopping onions, crushing garlic), and taking care of security. I also told them about the days we spent in the army, how I got to hold an Uzi gun and spend one afternoon at a secret F16s landing strip in the middle of nowhere. Also, of course, this strange training we had that sounded so detached from reality at that time – something called anti-terrorism practice.

As I got carried away with all the stories, my food got cold.

“Aren’t you going to eat, sweetie?” my dad asked.

I finally stopped talking to eat. And my mother seized the opportunity, right as I was chewing, and broke the news she was anxiously keeping inside – probably still in shock.

“So, Mauro, do you know that Laura is no longer a virgin?”

Obviously, the sharing of that information made me choke. Why in hell would she bring it up? Over lunch? To my own dad?

I could see my father’s painful look at me, “What?!” - to which I left to the bathroom, really choking on my food, and trying to run away from the most unpleasant conversation I had ever had in my life.

I could overhear their talk, “his name is Oscar, an Argentinian boy from the kibbutz. Apparently, their parents escaped the dictatorship and left Buenos Aires in the seventies.”

My father sounded relieved, “so the parents are… probably communists, right?”

And my mom corroborated the theory, “definitely comrades. Laura needs to explain more about the political aspirations of the family…”

There it was: to deviate from the main subject, my parents wanted to explore was the political position of my first boyfriend’s family. His intellectual background was the focal point that would determine his character. In a way, that broke the ice and I could come back from the bathroom and start focusing on his family instead of my first time.

I was still totally embarrassed that now both my parents knew it. But, again, that was the way they had raised me, and I would not hide important things from them – never.

As my dad left, my mom sighed, “you are no longer a child, oh my God”, hugging me tightly, almost depriving me from air. She never reprimanded me, not for a second. My mother trusted me that if I had had sex, it was because I had felt ready for it. There was no shadow of judgment.

For the Cheap Seats

Later that same day, I went over to my grandparents for dinner. When my father picked me up, I was so afraid he was going to ask me about my first time with Oscar that I started to talk nonstop, going on and on about Palestine, the Gaza Strip, Israelis and all those endless subjects. I felt much better once we got to my grandparents, affectionate hugs and kisses from my grandma Clara, and a lot of information sharing with grandpa Manoel, since he was the one who had sent me on the trip to the sacred land. I had brought little gifts for everybody and the night went well, that is until we all set around the rectangular glass table for dinner.

“So, Laura lost her virginity.” my father casually said, as if he was saying: “Laura learned some Hebrew in Israel” or maybe “Laura worked as a cook in the kibbutz.”

I could see their faces as the shit hit the fan. Their only grandchild became a woman by having sex at 15 with a guy from the kibbutz they sent me to! A breath of sharp air cut the room; I could feel it in my neck. My daddy’s eyes became almost red, maybe he wanted to cry because this piece of information would cause time measurement: knowing that I was no longer a virgin would turn a big page of his book of life that would never be unturned. Time would not come back. His gracious daughter had indeed become a woman. He stared at me in a way our eyes sealed, and I could no longer look elsewhere. Noticing the drama, my grandmother came to rescue:

“Laura, is he a Jewish boy?” she asked in the most somber tone.

Confused by all the revelation and his reaction, I almost screamed, defending myself: “Of course! I was in Israel!”

And then the most unreal thing happened. My grandfather raised his wine, followed by my grandma and my dad, and they all said: “Mazel Tov!”

Yes, when I said I had the coolest parents of all, I was not lying. Thanks, mom and dad, for being so caring and loving with me! And happy birthday to both of you, my September folks!